BOSTON – Beacon Health Options (Beacon), a leader in behavioral health management, announced today that, as part of its suicide prevention efforts, the company will roll out Mental Health First Aid (MHFA) training to its employees nationwide. The announcement aligns with September as Suicide Prevention Awareness month and September 11-16 as National Suicide Prevention week.

Beacon began the company’s suicide prevention initiative earlier this year with the publication of its well-received white paper, “We Need to Talk About Suicide.” The paper’s focus is the “Zero Suicide” model, an evidence-based approach to preventing suicides, which is anchored in the belief that suicide deaths for people under care are preventable.

For every individual who dies by suicide, 278 people move past serious thoughts about killing themselves, according to the National Action Alliance for Suicide Prevention.

“An important tenet of the Zero Suicide model is workforce training. So, Mental Health First Aid training is a logical place for Beacon to launch its efforts with employees,” said Beacon Vice President, Wellness and Recovery Clarence Jordan and the leader for this phase of the initiative. “Often referred to as ‘CPR for the mind’, this training will arm Beacon employees with the skills necessary to recognize a behavioral health problem and how to handle it.

“Even though we work in the behavioral health field, our employees are also regular everyday people who face real stressors and mental health issues. With this training, they become more effective in communicating about suicide and other mental health conditions. Each of us becomes an advocate for our friends, family, coworkers – even ourselves,” Mr. Jordan added.

The National Council for Behavioral Health offers the eight-hour Mental Health First Aid training, first launched in Australia, in the United States. Last month, Beacon hosted a “train-the trainer” session for nine employees who join staff in the company’s New York and Colorado offices already MHFA-certified to teach the course to others.

Beacon Clinical Care Manager Jesse Martin is one of Beacon’s new MHFA trainers and explains his biggest takeaway from the training. “I realize that it just takes a moment to recognize the signs of suicide risk and make an impact on someone’s life,” said Mr. Martin. “The smallest action can help people see the light in the darkness, and that is a pretty powerful lesson to learn.”

Beacon Health Options encourages all companies to sponsor a suicide prevention training such as MHFA for their employees. To learn more, visit www.mentalhealthfirstaid.org 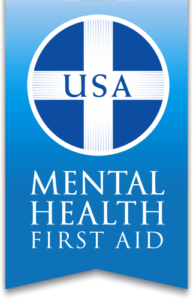