Shift In How We Think About Suicide Prevention Needed

BOSTON – Feb. 15, 2017 – Beacon Health Options’ (Beacon) latest white paper, “We Need to Talk About Suicide,” promotes the Zero Suicide model as the best approach to shift how we think about and treat suicide. Risk of suicide, or suicidal behavior disorder, is a condition that can be prevented and treated, just like other mental or physical health conditions.

This fundamental shift in thinking affects how we deliver care for people at risk of suicide. Proactive identification of individuals with suicidal behavior disorder and then treating those individuals with evidence-based practices will deliver the most impact. The Zero Suicide framework, developed by the Suicide Prevention Resource Center and the National Action Alliance for Suicide Prevention, offers the best approach for doing so.

Based on Zero Suicide’s seven-pronged model, the paper sets out action-oriented recommendations on how healthcare organizations and the workplace can start thinking about suicide differently and how to apply strategies to support this different point of view. With suicide deaths increasing by 24 percent over the past 15 years, the paper is timely in its probe of this pressing topic.

“I think most people, in one way or another, have been affected by suicide,” said Beacon Health Options Chief Executive Officer Timothy Murphy. “I know that I have. As the CEO of a managed behavioral health company, I plan to lead our company in rethinking how care is delivered for people at risk of suicide. The evidence is there, and it’s our responsibility to base our work in it.”

“Through this publication, we are aiming to raise awareness of the prevention and treatability of suicide,” said Beacon Health Options Chief Associate Medical Director and author of the white paper, Emma Stanton, M.D. “Some may question the feasibility of a target of ‘zero suicides’. We are aiming to make suicide a ‘never event’ as much as we possibly can.”

“Talking about suicide is difficult for everybody, even for clinicians,” said David Covington, CEO and President, RI International Inc. and Executive Committee member of the National Action Alliance for Suicide Prevention. “It’s a positive step to see Beacon Health Options igniting an important conversation about suicide prevention as a starting point for the role that payers can play in redesigning care.”

To learn more about this complex condition and the Zero Suicide framework, Beacon invites you to view its blog post at beaconlens.com. There you can also download the white paper and offer your comments and questions.

“We Need to Talk About Suicide” is the third in a series of thought leadership papers on important mental health and substance use disorder topics. In 2015, Beacon released “Confronting the Crisis of Opioid Addiction,” which calls for treating addressing addiction as a chronic brain disease. Beacon’s 2016 paper, “Integration,” explored the collaborative care model as the best approach to the integration of physical and behavioral health care.

The National Action Alliance for Suicide Prevention is the public-private partnership working to advance the National Strategy for Suicide Prevention and make suicide prevention a national priority.  The Substance Abuse and Mental Health Services Administration provides funding to EDC to operate and manage the Secretariat for the Action Alliance, which was launched in 2010 by former U.S. Health and Human Services Secretary Kathleen 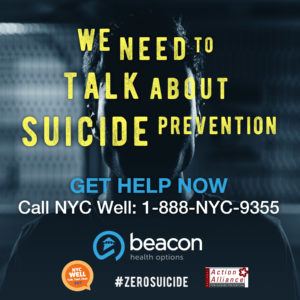