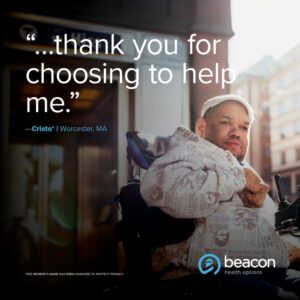 Restoring dignity for Cristo by removing barriers to specialty care

Cristo[1] is a young man living independently while suffering from multiple health issues that include severe asthma and a debilitating disease that forces him to use aids to help him move around. His condition causes chronic pain and has resulted in a limited ability to walk and care for himself. When the pain is too great to use his walker, Cristo relies on donated wheelchairs that are in poor condition.

During a recent summer, Cristo suffered an asthma attack that required an extended period in a rehab facility. Once home, he received no follow-up services or support except for his mother who was limited to helping her son outside her own working hours.

As Cristo tried to arrange for support services he kept running into barriers. In one incident, he thought he had been approved for personal care services but was told he would need a live-in caregiver. In another incident, Cristo learned that he was ineligible for a motorized wheelchair because his discharge from rehab had been improperly reported.

Recognizing that Cristo needed help, his primary care provider referred him to Beacon’s Integrated Care Management program (ICM). The team worked quickly to understand the barriers preventing Cristo from receiving proper support. First, ICM discovered that Cristo had been connected to a service provider for adults in foster care – not independent adults – while at the rehab facility. ICM corrected this error by providing the appropriate referral to facilitate a proper transfer of care. This allowed Cristo to hire his mother as a caregiver, which allowed her to work less elsewhere and spend more time caring for her son.

ICM also ensured that Cristo received the motorized wheelchair he so desperately needed. The day of the fitting, ICM received a text from Cristo stating that the relief he felt moved him and his mother to tears. He went on to say, “… thank you for choosing to help me. I know at times I…hide from the world but it’s only because I struggle so much…”

[1] The member’s name has been changed to protect privacy.